This Learn Spanish verbs lesson illustrates the present progressive tense that’s used to describe actions that are in progress at a specific moment in time (the present).

In English, it is the auxiliary verb “to be” and the present participle.

In layperson terms, the “present participle” means verbs with “ing” attached to the end of the verb.

The present tense is used much more frequently in English than it is used in Spanish.

As in Spanish, we use it to talk about actions that are in progress now or right now. However, in English, we also use the present progressive tense to describe habitual actions or to speak in general. For example:

I am living in the suburbs.
You are working in the post office.
She is taking Spanish lessons.

Normally in Spanish, the present tense is used to emphasize that an action is taking place now. But many Spanish grammar books do not indicate that there is another use for the present progressive tense.

And that the present progressive tense can be used to stress that action is continuous.

Learn to Speak Spanish with SpanishPod101

It’s Normal to Learn Spanish Verbs  from Trial and Error 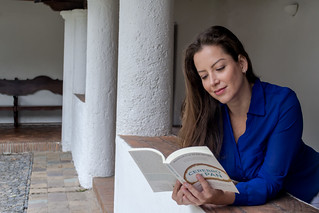 I learned this one from trial and error. As embarrassing as it is to admit, a five-year-old little girl corrected my Spanish grammar. That’s how I found out.

The first time it happened it happened with an adult. I was trying to tell an adult that I am learning Spanish.

Because I was not learning Spanish at that specific moment. At that very moment, I was trying to talk to her in Spanish.

At the time, I thought that maybe she was wrong and that my textbook was right. So I tried telling my next-door neighbor’s five-year-old that “Yo aprendo español” who proudly corrected my Spanish.

But she told me: you’re supposed to say ‘“Yo estoy aprendiendo español.”

How to Form the Present Progressive Tense in Spanish 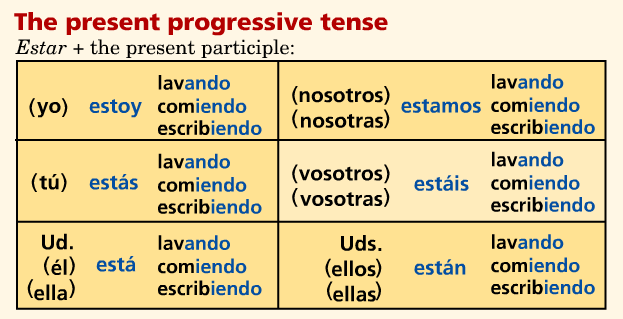 And you form regular “er” present participles by dropping the “er” and adding “iendo”. Let’s try it: