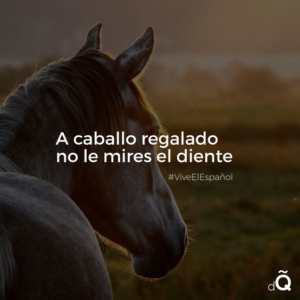 Learning some Spanish proverbs is a great idea if you want to understand the culture of Spain and many other Spanish Speaking countries.

By studying them, you will quickly learn many Spanish words used in idioms and some Spanish grammar too.

The English translation for “A caballo regalado no le mires el diente” (pictures on the left) is “Don’t look the tooth of a gift horse”, while the English equivalent is pretty similar: “Don’t look a gift horse in the mouth”

Proverbs will help you  to be more expressive when speaking Spanish! For example you can say:

Don’t sell the bear’s fur before you hunt it.

when somebody seems too enthusiastic for something.

Proverbs are very important for the Spanish learner, because Spanish spealers like the a lot and use them commonly.

You will find verbs, nouns, pronouns, adjectives and adverbs. Proverbs also will allow you to learn the Spanish verb tenses are used too, and many other aspect of grammar.

But take a look with me at some useful grammar learning with proverbs. Proverbs are, in fact, folk wisdom at your service! With proverbs you have a “learn one, get three” chance in your Spanish learning endeavor:

In this post we present some Spanish proverbs that will help you to learn the grammar together with the Spanish culture.

The understanding of cultural diversity is crucial in language learning.

Spanish Proverb on the left

English Equivalent: A man is known by the company he keeps.

This is especially true when an English speaker begins to study a neolatin language like Spanish.

When teaching we have studied the cultural differences between English, Spanish, German and Italian proverbs.

Thus we discovered that sometimes the same meaning is expressed in different languages with different proverbs and expressions that reflect the environment, traditions and beliefs of different peoples.

So you will find three different types of Spanish proverbs

a) Proverbs very similar or equal to English proverbs. In this case you can literally translate the saying from Spanish to English and viceversa:

b) Spanish proverbs with a slight different wording than their English counterpart:

“Out of sight out of mind.”

This proverbs is quite similar to the corresponding English proverb, but its literal translation is:

As you can see, in this proverb the concepts are the same, to see and to feel, but for Latins the corazon substitutes the mind…

Most likely this happens because Latin people are “gente caliente” (warm people), so what matters is the heart, not the mind!

English equivalent: Many kiss the hand they wish cut off.

c) Proverbs with the same meaning as the equivalent English proverbs but with a total different wording:

d) Proverbs without no English equivalent:

One of the most common pronoun used in Spanish proverbs is the interrogative pronoun “Quien” (who). Here some example:

This Spanish proverb has almost its almost exact equivalent in English:

“As you make your bed, so you must lie.”

However the literary translation should be:

And the meaning is pretty obvious:

“You must put up with the unpleasant results of a foolish action or decision.”

Another pronoun often used in proverbs is “lo” that means “him”

Al que madruga, dios lo ayuda
God helps the one who gets up early

And here’s the equivalent proverb in English:

The early bird catches the worm.

The verb “madrugar” means to wake up early.

The verb form “hay” occurs often in Spanish proverbs in its negative construction“no hay”, meaning “there’s not, there are not”.

Translation: A golden key opens any gate but that of heaven.

The wolf finds a reason for taking the lamb.

Translation: There is no such reason as the cane.

20 Idioms In Spanish And Their Meanings – Video

Other Spanish Verb In Spanish Proverbs

Translation: God is slow, but he does not forget.
English equivalent: Punishment is lame but it comes.