…so that you don’t make these same awful mistakes when speaking the language.

I have a friend from Nueva York (New York) who is staying with me here in Medellín while he looks for a place to live.

He came here to Medellín to study Spanish.

This friend is going to be taking classes at a local university.

He arrived about a week ago and he made of ton of mistakes while speaking Spanish.

Most of them are common gringo errors.

So let me tell you about his mistakes so that you avoid them.

Tom (not his real name) and I went to an Italian restaurant Saturday night to eat.

And just by coincidence, the owner is a guy from the Bronx from what used to be an Italian neighborhood — not very far from where I once lived in the Bronx.

When the “mesero” or waiter took our orders I requested my favorite “entrada” or appetizer:

That’s when Tom made his first mistake.

You do not call a wine glass a “vaso.”

“Vaso” does mean drinking glass, but you have to use the word “copa” when referring to a wine glass. For example:

Me regala una copa de vino.  — May I have a glass of wine.

And the second mistake that Tom made also involved the wine.

It is a common mistake for English speakers to literally translate English words and phrases when speaking Spanish.

So it did not surprise me when Tom asked for “vino rojo.”

But that’s not how to say “red wine” in Spanish.

Tom then made a third mistake:

Well, it wasn’t actually a mistake.

Tom is also from the Bronx.

And New York born Puerto Ricans and Dominicans speak Spanish that is lot more informal than the Spanish of Colombia.

So that’s the type of Spanish Tom is used to hearing. 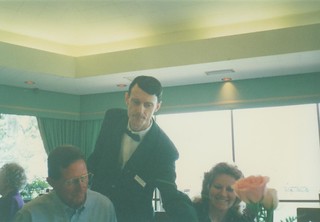 And when Tom dropped his knife and fork which were wrapped in a “servilleta” (napkin) in order to get the waiter’s attention, Tom shouted “¡Mira!” “¡Mira!”

When that didn’t get the attention of the “mesero” or waiter, Tom then shouted:

In the Bronx or some Spanish-speaking parts of Nueva York, you may get someone’s attention by yelling “¡Mira!” or “¡Oye!” but not in Colombia.

In Colombia, yelling “¡Mira!” or “¡Oye!” “¡Oiga!” to get the attention of the “mesero” is considered “maleducado.”

By the way “maleducado” does not mean what you think it means. “Maleducado” is an “amigo falso” (false friend).

“False friends” or “amigos falsos” are Spanish words that are pronounced and spelled a lot like English words but have very different meanings.

The Spanish word “maleducado” does not mean poorly educated or that one has a bad education. “Maleducado” means discourteous.

So what is the proper way to get someone’s attention in Latin America?

In Latin America, in order to get the attention of someone, you should say “Perdón” or “Disculpe.”

But most Colombians would simply say “señor” or “señora” in order to get someone’s attention.

And in Tom’s case if the waiter (or waitress) happened to be younger than him, words such as “muchacho” or “chico” or “niña” are all acceptable in Colombia.

Finally, Tom did get the waiter’s attention by yelling “¡Oye!”

And when the waiter approached our table Tom told him:

Tom actually surprised me with that phrase.

His grammar was perfect.

But his choice of vocabulary had another common gringo error — which now made 4 errors for Tom.

But “las cubiertas” means “the tops” or “the covers.” So Tom should have said:

Since Tom used the wrong vocabulary words the waiter didn’t understand him and asked Tom “Cómo?”

And Tom responded and committed a fifth mistake:

But “cuchilla” means razor blade. But the waiter apparently understood Tom because he returned with a “servilleta” (napkin), “tenedor” (fork), “cuchara” (spoon), and “cuchillo” (knife) — instead of a “cuchilla” or razor blade for Tom to shave.

After we finished eating our meals Tom made mistake number 6. He said to me in Spanish:

Tom gave me a very puzzled look when I responded by saying “Why? Is the waiter going to tell us a fairy tale?”

So Tom should have said:

As we were leaving, Tom made a seventh and final Gringo mistake.

There was a couple waiting for a taxi and blocking the restaurant’s entrance, and this time he said “Perdón”.

The couple did not move but looked at Tom as if he was trying to get their attention.

That’s when I said “permiso” — which is the correct way to say excuse me when you are trying to pass and someone is blocking your way.

You can either say “permiso” or “con permiso.”

So I hope that by learning about Tom’s 7 mistakes this will help you to avoid making these same Gringo errors when speaking Spanish.

So, let’s cover 5 Spanish words or phrases that you may hear used in Latin America. NB: are not taught in your typical Spanish course. 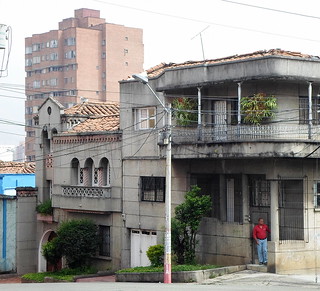 Yo sé que me compraste un carro pero no me lo eches en cara.
(I know that you bought me a car but don’t throw it in my face.)

The word “chantaje“ is used in Latin America not  only to refer to financial blackmail or financial  extortion but also emotional blackmail.
In other words, “chantaje” commonly refers to a form of  psychological manipulation.

Yo pensé que el carro era un regalo. Pero es un  chantaje porque quieres que yo te haga un favor.
I thought that the car was a gift. But it’s blackmail  because you want me to do a favor for you.

Here’s the verb form of the word: chantajear
Paola está haciendo la tarea de Juancito porque  la chantajeó diciendo que si no lo ayudaba, no jugaría nunca más con ella.
Paola is doing little Juan’s homework for him because he blackmailed her by saying that if she was
not going to help him he would not play with her ever again.
And here’s the adjective/noun form of the verb: chantajista

Mi aporte a la empresa será el mobiliario de la oficina.
My contribution to the company will be the office furniture.

Interestingly, I heard the word “azotea” used last night when I was watching one of my favorite movies dubbed over in Spanish: Hangover.
You remember the scene near the end of  the movie where they find their friend on a rooftop with an awful “quemadura de sol”  (sunburn).
The Spanish-language version of the movie Hangover is called ¿Qué pasó ayer?  (What happened yesterday?)

Me subí a la azotea para instalar la antena.
I went up to the rooftop terrace to install the antenna.

The Spanish word that is most frequently used in Latin America for “hangover” is “resaca.”
With that said I want you to be aware that I have NEVER heard the word “resaca” used in Colombia when referring to a hangover.
“Resaca” can also mean undercurrent:

La resaca lo alejaba de la orilla rápidamente.
The undercurrent was quickly moving him away from the shore.

In most of Colombia, including here in Medellin, the word for hangover is “guayabo.” For example:

Ella tiene mucho guayabo.
She has a very bad hangover.

When I lived on the coast of Colombia I noticed that in the coastal cities of Barranquilla and Cartagena they used another phrase for “to have a hangover”:

Esta mañana estaba en guayabado.
This morning I had a hangover.

Another Spanish Lesson: Click Here for a Lesson about the Spanish verb “llevar”…